Kamilla Gamborg Isaksen works as a journalist at TV2 Fyns youth desk ‘bemærk’ which is Danish for ‘attention’. She has been working with children’s television and youth radio for the national Danish Broadcasting Corporation.

Blog: A New Model for Constructive Storytelling in the Making

Every story has a beginning and an ending. These two elements are always on my mind when I work on a story for the news.

“It turned out to be an eye-opening experience.”

The other day I changed my focus a bit. I still kept my angle in the back of my mind, but I wrote down a new word on my list. Bumps. A word that may form many more stories in the future once it has become an essential part of our work with developing a model for constructive storytelling. Which is still work in progress. To explain to you what bumps can do to your story I need you to imagine your story as if it is a road. You still have a beginning and an ending, but the road is bumpy – as every story told from the real world will be.

I changed my focus because I together with a handful of colleagues was developing and testing our new model to create constructive journalism. It turned out to be a pretty eye-opening process. 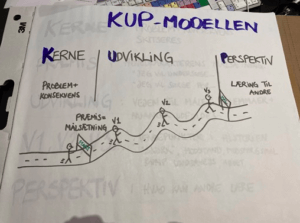 Photo: The K-U-P-model is visualised as a road with a starting point (K) ‘the core’ of the storyline, the bumps along the road illustrating (U) ‘development’ in the story and and a finish line with (P) for ‘perspective’.

Using the new model, it will soon be your main focus to report about the bumps instead of only sticking to a sharp angle and getting people to say what you need them to say, so they will fit into that same angle. The model is based on three words; K-U-P. 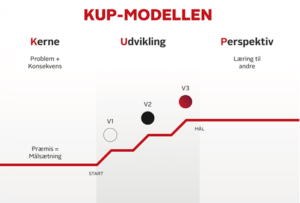 Model: The K-U-P-model which emphasises ‘the bumps’ in a traditional storytelling structure was developed at TV2 Funen.

The KUP-model is created to always lie on top of a well-explained problem. The core will make sure you’ve explained the problem well so people understand it.  Then you are ready to begin your bumpy road trip. When you start a journey like this you as a storyteller or the main character in your story will always need to set a goal for your story. This is your angle. You will stick to the goal during the trip but the bumps might make the goal look different in the end. Let me give you an example.

Did you notice the bump?

I tested the KUP-model on a new series about young people at Funen who are religious. So, what’s the problem in being very religious as a young person in Denmark I asked myself? I couldn’t really define my answer to this question, so I researched more. I needed facts and not only prejudices.

I found out that we are the second least religious country in Europe, so you are part of the majority if you do not believe in anything in Denmark. Especially being a part of the Danish youth.

When I met my main character Mathias, a 22-year old Mormon, he said that in many ways he was not that different from other young Danes. Funny, I thought. My goal is to explain the opposite, but let’s stick to the bumps and see what happens.

I asked him; ‘Why is it difficult to believe and be a part of a society where the majority doesn’t believe in anything?’. Mathias gave me many good answers such as the difficulties in not drinking alcohol or having sex before marriage in a society where both is a part of the culture.

Normally, I might have cut the story here. I would have had an expert confirm the problem as well and say something clever about Danish youth-culture or religious groups isolating themselves from the society. But this time I looked at my paper and realized that I hadn’t even moved from the core-area in my new model.

‘Notice the bumps,‘ my notes reminded me.

“Some of these questions did not directly feed my goal but they revealed important reflections.”

So, I continued to ask about the difficulties and forgot about my ending for a little while. I asked questions like: “What made you stick to your religion?” and “How did you overcome the difficulties that religion caused you?”. Some of these questions did not directly feed my goal but they revealed important reflections.

Mathias explained to me all the benefits he gets from not drinking and the good things that comes with believing in something. He took me to meet his friends in the church and I realized they of cause worry and talk about the same stuff that most young people do. He told me about how lost he sometimes get when it comes to faith, because even as a very religious person you doubt sometimes. But most days he was sure this life was right for him and he was happy.

Grey will not ruin your story

I stuck to my goal because it’s true that it’s not easy to stand out from the majority like Mathias does. But I also took my time to explain why overcoming these difficulties can be worthwhile for some people. The process using the KUP-techniques both made me demand more of my main character and it made the story seem more nuanced.

For some of you these conclusions might seem obvious. I must admit that I too used to see myself as a journalist who didn’t only see things in black and white, one who also noticed the grey. The nuances. Truth is, when you have a deadline you often choose to stick with your routines and for a lot of journalists this means ‘sticking with your one sharp angle’. The consequences are that you forget important details and sometimes you don’t even notice because you asked the wrong questions.

“Despite what I expected it didn’t ruin my endings or my angles to tell stories like this.”

The KUP-model have forced me to invite a bit more grey into my stories, and I still ask critical questions along the way. So, for a change try to really notice the bumps in your stories. Dwell on them and learn from them so your audience can do the same. Ask a question that’s not directly in line with your angle and see if it offers you a new perspective or if it reveals relevant details.

Despite what I expected it didn’t ruin my endings or my angles to tell stories like this. So far it has only made them more complete and my way of working more trustworthy. And that’s exactly how I would like my journalism to be seen.

Constructive Journalism Tested at TV 2 Fyn.
In 2019 TV 2 Fyn gave themselves a challenge. They set out to become most constructive media as well as the largest test center for constructive journalism in Denmark. To trace the change they decided to log their experiences in a blog format offering important insights on how to become constructive.