How to Save the Media and Democracy with Journalism of Tomorrow 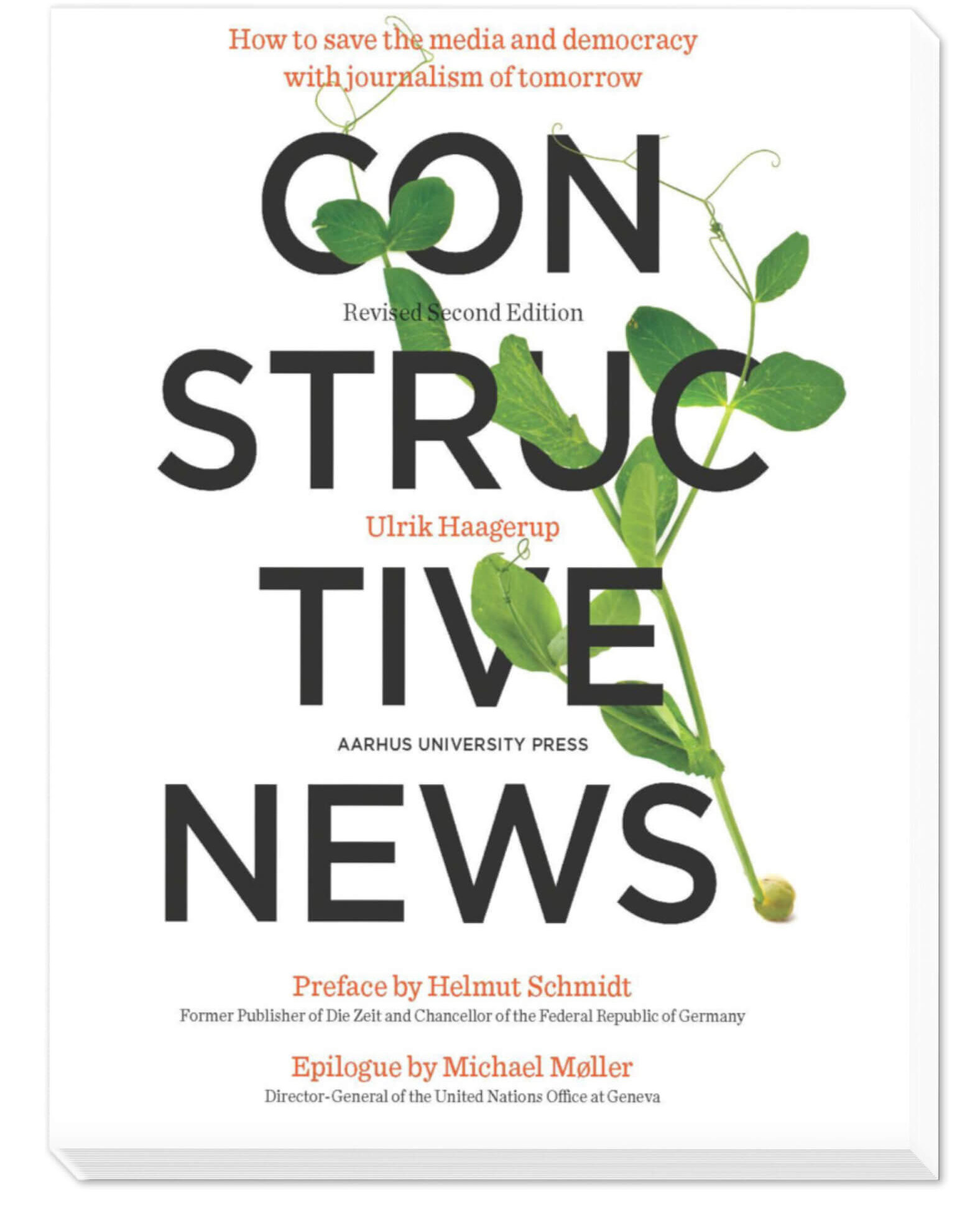 Review: New ways for journalism practice … can we fix it? Yes, we can.

New ways for journalism practice … can we fix it? Yes, we can. Be gentle in what you do, firm in how you do it. These are the key messages of constructive news which reiterates journalism’s fundamental purpose: an obligation to truth, verification, independence from those it covers, and acting as an independent monitor of power. There are critical elements in constructive journalism’s role as truth-seeker, and these include the importance of context, of not over-emphasising the negative, developing a meaningful engagement with the audience, an openness to public criticism and negotiation as well as applying personal conscience.

But in today’s age of media disintegration and ever-changing ecologies that struggle for a future, the foolishness of insisting on the need to keep a collective identity as a gatekeeper when the fence is gone, features as a key message in Ulrik Haagerup’s revised 2nd edition of Constructive News. The book is a practical and realistic guide that aims to save the media and democracy by opening a new way of thinking about journalism practice, that is a departure from the old notions of ‘If it bleeds, it leads’. Journalism is not stenography – it is the best obtainable version of truth, says Haagerup as he warns that in societies with no authorities left, the rudest, the loudest and the one with most lies will become president.

Haagerup, founder and CEO of the Constructive Institute, launched the institute in Aarhus, Denmark, in 2017 after working for 10 years at the Danish Broadcasting Corporation (DR) as executive director of news. He also worked as editor in chief (1995-2007) at the Danish daily Jyllands-Posten and later at the Daily Nordjyse. His journalism education includes programs at Stanford University, Stanford Research Institute and the Wharton Business School at the University of Pennsylvania. He has served as a member of the World Economic Forum Global Council on the Future of Journalism and was awarded the Cavling Prize for excellence in journalism in 1990.

In an epilogue in the book, the Director General of the United Nations Office in Geneva, Michael Moeller, who serves on the advisory board of the Constructive Institute, calls for action with:

We live in a world where the flow of information and the possibilities for citizen participation have never been greater. Yet many feel disempowered by the news, are disappointed in their political leadership and disengaged from decision making. This generates a democratic deficit through apathy and indifference. It is often said we get the media and the political leaders deserve (155).

Haagerup calls for data, different points of view and solutions that inspire people into action through journalism.

Based on his own experience in journalism, Haagerup’s focus is inspiring because Constructive News offers a paradigm shift in news production, new ways to replace old habits of negative news, drama and conflict. It encourages journalism practitioners to search for deeper understanding of situations and issues, facilitating a nuanced approach to matters that get reported while appreciating the complexities of storytelling and news production.

Similar to the traditional journalism mantra of the five Ws and H (what, when, where, why, who, and how) of news, Constructive News explores the why and the how of causes at a deeper level, seeking and providing potential solutions. The concepts are not different from those of peace journalism and solutions journalism which have been around for some time. An interesting aspect of constructive news is that it gives prominence and recognition to both sides of the coin and focuses on reporting on solutions to problems.

So how can we define ideas like constructive journalism? Haagerup draws upon the work of colleagues such as US reporter, author and co-founder of the Solutions Journalism Network, David Bornstein, who says the majority of publishers, editors and reporters contend that “the primary role of journalism is to expose wrongdoing.”

We know from behavioural science that seeing the problem alone is rarely sufficient to generate corrective action. People need to know what they can do and how. That does not mean including a little ‘good news’ now and then, but regularly presenting people with innovative ideas and realistic pathways and possibilities that remain outside their view frame. In this sense solutions journalism needs to be interwoven with traditional journalism – it rounds out the story, so to speak. Without it, society suffers (136).

Haagerup says this is the best he has ever heard.

Explaining why we need to change, Haagerup quotes the Dalai Lama: ‘Too strong a media emphasis on death and violence can lead to despair’ (59). He supports this argument with the work of Hans Henrik Knoop, an associate professor of psychology at the Aarhus University in Denmark:

News media is now so full of stories on misery. Negativity controls news flow, and therefore also politics and public debate. And it has consequences: in the same way as you know that you become what you eat, you psychologically become what you focus on (59-60).

Knoop says that apathy or fear is the result of mentally turning off from the constant piles of problems and people disagreeing and arguing disrespectfully. The risk is that people not only deselect media as sources for news, but also that they disengage in the public debate due to the extreme priority of the negative.

If we want engaged citizens, who fight to solve the small and the big problems of the world, who believe they can make a difference, then media have to do their part of the work. Journalists are to a large degree responsible for the fundamental distrust the public has towards politicians. Of course, journalists have to be the watchdogs, but nobody has said that their job is to create their own villains (60).

Haagerup also quotes Helmut Schmidt, German statesman and former federal chancellor of West Germany, and publisher of German weekly Die Zeit who said that western democracies today have developed into media democracies, and the media’s influence is stronger than ever before in the history of mankind. ‘The media are setting the agenda, deciding how populations perceive themselves and the world. Media democracies do not create leaders, they create populists (31).

The author asks what he calls ‘embarrassing questions’:

The secret algorithms of social media giants have proven to favour posts which talk to the heart rather than the head. A post on Facebook that generates pure joy or hate spreads much faster and wider than nuances and balanced reporting – changing news media into views media.

Haagerup quotes former CEO of Microsoft and now philanthropist, Bill Gates: ‘The world is steadily becoming a better place to be. But this is not covered by the media, as no one will call a press conference about those children who did not die from malaria’ (37) while presenting several examples of misapprehension that a good story can be an unhappy one, forgetting the nuances and the overall picture. Constructive news, he argues, is about searching for understanding, providing nuance and appreciating that issues are complex. The solution is to think outside the box and not let traditional frames and habits limit your thinking.

Quoting an old Chinese saying ‘When the wind of change blows, some people build windbreaks, others build windmills’, Haagerup suggests ‘Now what?’ as a starting point for constructive news and sums it up as being critical, balanced, tackling important issues facing society, calm in its tone and does not give in to scandal and outrage. It is bridging, not polarising, forward looking and future oriented, nuanced, contextualised, and facilitating well informed debate around solutions to well documented problems. This book provides alternatives on how to make journalism relevant and effective with a focus on constructive possibilities that are much needed at a time of ‘crisis’ in the profession. It paves the way for a new emerging trend that will enhance media’s power with simple, effective solutions: away from ‘whodunit’ to ‘howdunit’.

Dr Asha Chand is Associate Dean International in the School of Humanities and Communication Arts at Western Sydney University. She spent her journalism career in Fiji and was chief of staff of News Ltd-owned Fiji Times until she migrated to Australia in 1998. She teaches journalism and was area convener for seven years until 2020.

Negative stories make the news. Drama and conflicts, victims and villains are our modern world. Or are they?

This revised second edtion on constructive news challenges the traditional concepts and thinking of the news media. It shows the consequences media negativity has on the audience, public discourse, the press and democracy as a whole.

The book also explores ways to change old news habits and provides hands-on guidelines on how to do so. Moreover, the book presents numerous examples from the author’s ten-year tenure as executive director of news at the Danish Broadcasting Corporation where he led a successful paradigm shift in news production.

Constructive News is a wake-up call for a media world that struggles for a future, as well as an inspirational handbook on the next megatrend in journalism.