The Coronavirus has offered a significant challenge to the financial situation of many news media but it has also been a catalyst for audiences returning to trusted media sources. In the Netherlands and beyond this could be an opportunity for journalists to turn towards the more constructive content that their audiences have been asking for.

In the Netherlands, as in many other countries, subscriptions to newspapers are up and more people are watching television news.  People return to traditional news media in times of crisis such as the corona pandemic because they expect to get accurate and trustworthy information.

At the beginning of the Corona crisis, combating the problem together was central in most news reports. Unfortunately, the initial shared focus on solidarity, prevention, and solutions seems to be giving way to increased focus on political and social contradictions and disagreements. Sadly, many journalists are reverting to prior routines in which they mainly focus on negative developments and emphasize political conflict.

This has  become particularly visible in the recent weeks. The ombudsman of the Dutch newspaper indicated that there was a struggle to include a more constructive angle on the Corona issues. Not only was the need for this outlined by discussions on the news-floor, but readers were also complaining about the negative and sensational approach they found in their newspaper.

“An overload of almost identical, often superficial news, causes people to feel restless and uncertain about what is really going on, because the context behind the numbers is missing.”

The demand for constructive angles can prove difficult for journalists trained to provide a 24 hour stream of breaking news and new ‘facts’. This practice makes it intuitive to post continuous updates on the numbers of infections, deaths or economic shrinkage. Yet, instead of helping people understand reality, this does the opposite. An overload of almost identical, often superficial news, causes people to feel restless and uncertain about what is really going on, because the context behind the numbers is missing. Work by GapMinder and IPSOS Mori on the “perception gap” shows that the current interpretation of facts often does not lead to an accurate world view. People overwhelmingly have a more pessimistic estimation of issues, ranging from global poverty to teenage pregnancy, than the objective reality.

Journalists often believe that declining news consumption is caused by people’s diminishing interest in social issues. On the contrary my research has found that young people in the Netherlands for example experience a gap between what they want and expect from news and what journalism offers. Dutch millennials criticise news for being too elite- and institutionally focused and for not being relevant and valuable to their own lives. Worldwide news avoidance is growing because audiences feel frustrated and depressed by the predominantly negative focus that often seems to direct news selection and news coverage.

“Findings show that exposure to constructive news (as compared to traditional news) brings about the opposite and has beneficial effects.”

We know that exposure to negative angles in news messages increases negative emotions, such as fear and anxiety. Experiencing negative emotions narrows people’s scope of attention and increases people’s feelings of inefficacy and lack of control. In contrast, findings show that exposure to constructive news (as compared to traditional news) brings about the opposite and has beneficial effects. According some ongoing research of mine (soon to be published) it also stimulates feelings of hope and inspiration.  Further studies indicate that constructive news leads to higher engagement on social issues.

Not everybody agrees with the constructive approach. Some opponents think that constructive journalism secretly means positive news, this is a misunderstanding. Constructive journalism motivates journalists to look beyond the usual problem- and conflict- oriented format and to search for additional angles such as solution- future- and action-oriented perspectives, for example, to try to include more inspiring and engaging formats. When utilizing a constructive mindset, journalists move beyond the detached observer role to become facilitators of democratic conversation. This leads to a more public-oriented journalism, in which the audience becomes a serious stakeholder in the news process.

Today’s circumstances are a good moment to break with old habits; a catalyst for reflection on how best journalists can contribute to well-being in society. It is an opportunity to implement the type of news advocated by Constructive Journalism, that wants to provide citizens with contextual news on social issues, without over-emphasizing the sensational and what goes wrong. It critically questions journalists who solely focus on problematic angles in stories and who (disproportionately) represent institutions, and the logic of power.

Constructive Journalism calls for journalists to change their mindset and to be open to new values and practices that will frame their stories in ways that can lead to productive change. To achieve this, a new, more creative news-process is needed that focuses on new angles and ideas to replace standard modes of news coverage. 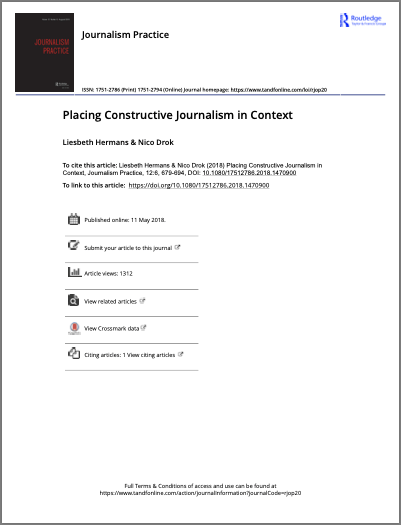 In my article “Placing Constructive Journalism in context” I identify several principles that can be applied in order to help journalists make constructive based decisions in the production of news:

These principles should be seen as a mix of strategies that apply in several stages of the news process. They are not fixed tools but instruments that can help journalists to broaden their mindset and attitude towards journalism.

The corona era has shown us that the news remains indispensable and clarifies how important quality journalism is to understand both the global and the local impact of the major issues society faces. More constructive journalism will only strengthen citizens’ engagement and mutual understanding, whilst enhancing the role of journalism in our democracies.