As part of a new study released on 14 April by the Media Insight Project, a collaboration of the American Press Institute and The Associated Press-NORC Center for Public Affairs Research it has been tested whether or not Americans share journalism’s core values. According to the creators of the project their findings opens up a new way of looking at the issue of media trust and may offer new avenues to address it.

In the following we sketch out the highlights of their overview article “A new way of looking at trust in media: Do Americans share journalism’s core values?“ 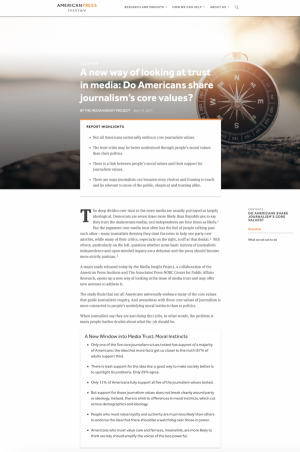 A new study released by Media Insight Project introduces a new way of looking at trust in media.

Only around one third (29%) of Americans support the traditional journalism focus on bad news, the belief that “a good way to make society better is to spotlight its problems.”

This is according to a study released by the Media Insight Project, a collaboration of the American Press Institute and The Associated Press-NORC Center for Public Affairs Research.

Tom Rosenstiel is Executive Director for the American Press Institute and one of the most recognized thinkers in the country on the future of news.

“We tend to think that stories that celebrate the good things in society are soft stories, kind of wimpy,” he said. “But they may be more important than we think in providing a full and accurate picture of the world.” Tom said

The survey tested for attitudes to 5 foundational journalism values:

Only 11% of Americans fully support the five core journalism values that were tested.

Only one of the five core journalism values tested has support of a majority of Americans, factualism, the idea that more facts get us closer to the truth (67% of adults support this).

Support for journalism values was not predicated around political affiliation or ideology. It was the moral values of people that had the most impact. Those who valued “loyalty” and “authority” were the least likely to support the watch dog role of the media.