News avoidance is considered an increasing problem for the news industry and democracy at large. As news companies lose consumers, democracy loses the informed foundation for an engaged citizenry. Meanwhile, research on news avoidance is hampered by the lack of a common understanding of the phenomenon.

News avoidance is a problem for the news media as well as for democracy at large. So what can be done to engage people in news coverage? Among other things, constructive, fact-based, transparent, and slow news may be possible solutions.

More news is available now than ever before. Still, a significant amount of people consume no, or a very limited, amount of news and even amongst those who are regular audiences a substantial proportion answer that they sometimes or often avoid news content. Furthermore, studies indicate that news avoidance is growing over time despite an increasing supply of journalism output.

News avoidance is a problem for the traditional news media. News organisations need readers, listeners, or viewers to generate advertising revenues, sell subscriptions and maintain their societal relevance. But news avoidance is also a problem for democracy. In general, news consumption has a positive impact on people’s knowledge of society and politics as well as on their political engagement and participation. So, how do we encourage people to participate in the news cycle? It would be great if a simple answer to that question existed.

News avoidance has a number of different causes and, as a consequence, also a number of potential solutions that are dependent on actions from different stakeholders. In a study recently published in the international journal Journalism Studies we have reviewed and classified the different causes and potential solutions related to two types of news avoidance – intentional and unintentional.

It cannot come as a surprise that many people feel that the news is too negative. It is next to impossible to tune into a television news broadcast, click onto a news website, or open a newspaper without being confronted with war, crime, scandals, natural disasters, and suffering. For some, such news has a negative impact on their mood and their well-being. A subsequent feeling of powerlessness makes them change the channel, turn off the television, drop the newspaper, or delete the news app.

“Constructive news is one possible way to avoid people turning their backs on the news due to its negative focus.”

Constructive news is one possible way to avoid people turning their backs on the news due to its negative focus. The idea behind constructive news is to not only address problems and shortcomings but also the solutions and positive examples that can serve as inspiration for how to handle challenges. The aim of this more balanced approach to journalism is to replace the feeling of distress and powerlessness with a feeling of hope and a sense of being able to make a difference in society.

Constructive journalism has gained traction in recent years, in Denmark for instance several news media have introduced constructive news in particular programs or sections of programs. The regional television station TV 2/Fyn is even working to implement a constructive mindset amongst all journalists to ensure that constructive news stories will blend with news stories that focus on problems and shortcomings

Low trust in news media and journalists has also been recurrent issue in recent years. For some, the trust in news is so low that they tune out completely. Often, low trust in news media is caused by a perception that journalists are not neutral and do not report the truth. One way that news media can potentially change this perception is to make a clear distinction between opinion and journalism based on indisputable facts. Another potential way to increase trust among news users is to increase the transparency in order for people to check the information included in the journalism and learn how reporters constructed the news story.

A third reason why people turn their backs to the news is that they find the stream of news stories overwhelming. The 24-hour television channels or the news websites constantly offer updates on the latest developments across several news stories. While some enjoy the almost endless supply of news, others have the sense of being hit by a news tsunami that is hard to manage.

To counter this cause of news avoidance, news media would have to put a break on the accelerating news cycle, offering news which explains the context behind headlines.  News overviews that make it easier to identify the most important news stories of the day would also attract these news avoiders. This can be done in different ways. Some of the traditional media are now producing newsletters that outline the most important stories of the day or daily news podcasts that go in-depth with one or a few new stories and provide further context. An example of this is The Daily by the New York Times. There is also a trend towards the rise of digital born slow news media which focus on a few stories each day. These news providers offer long-format in-depth journalism that contextualize the issues more extensively than regular news. Some examples of these are the Dutch De Correspondent, British Tortoise Media or Zetland in Denmark.

For those who unintentionally avoid news, the underlying causes are different. They do not turn their backs on news based on a specific dislike of news or certain aspects of news. However, when the supply of media content increases dramatically, it is much easier for people to pick exactly the content that meets their preferences. Thus, this type of news avoidance is—rather than an active rejection of news—based on a choice of other types of media content—often entertainment—that in effect crowds out news consumption.

One possible way of alleviating this unintentional news avoidance is to develop so-called public service algorithms. These algorithms ensure that people are presented with trusted, quality news when they stream their favourite entertainment show on demand or when they browse through their social media feed. 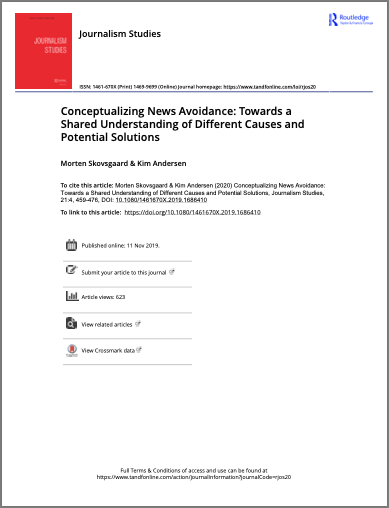 Who Can Solve the Problem?

In consequence, the potential to counter intentional news avoidance primarily lies with journalists and the news media. Editorial teams are able to change news content to make it less negative and more constructive; less opinionated, more fact-based and transparent; and less overwhelming, more contextualized and slower. The potential to counter unintentional news avoidance to a larger extent lies with the owners and manager of media corporations, social media platforms and politicians. Multipurpose media organisations and social media companies can decide to develop public service algorithms or other opportunity structures conducive of incidental news exposure. In turn politicians can decide to support the media companies developing such opportunity structures.

It is crucial that journalists, media managers, and politicians all make an effort to counter news avoidance in order to ensure that the citizenry is as well-informed as possible. However, if they are to succeed it is also important that the citizens reward their efforts. Citizens can also help to counter news avoidance by supporting constructive, fact-based and transparent, and slow and contextualized journalism.